The Garmin 301 Forerunner, which I've mentioned before on this site comes with a velcro wrist band. Which is great for running but when I cycle I prefer to have nothing on my wrist. Whatever I have on my wrist tends to slide down and rest against the top of my hand (because my wrist is bent upwards holding the handlebars). The skin then gets pinched whenever I go over a bump - which is often.

But my anal-retentiveness doesn't stop there! Simply putting the unit on the handlebars wouldn't suffice. I prefer to have nothing at all on the handlebars because I shift my grip over the entire width of the bars. I wanted the unit front and center, where it belongs, anyway. I knew I had to be creative!

I have faced this problem before mounting a Polar HR unit in front of the handle bars. That time I built an aluminum mount that was wedged between the stem and faceplate. That has since broken (it wasn't the best design anyway). I wanted something similar.

So here it is, a funky bike mount: 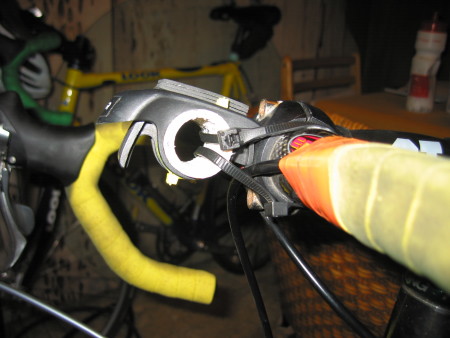 I used a Polar HR mount (similar to this one) with a piece of PVC pipe stuck inside of it. I then used four zip ties (two in tandem at a time) to attach the mount over and under the handlebars and around the stem. I also used some pieces of rubber to make the whole arrangement thicker so the watch band would be tight. Luckily for me there was a small hole between the polar mount and the front of the stem where I could fit a band: 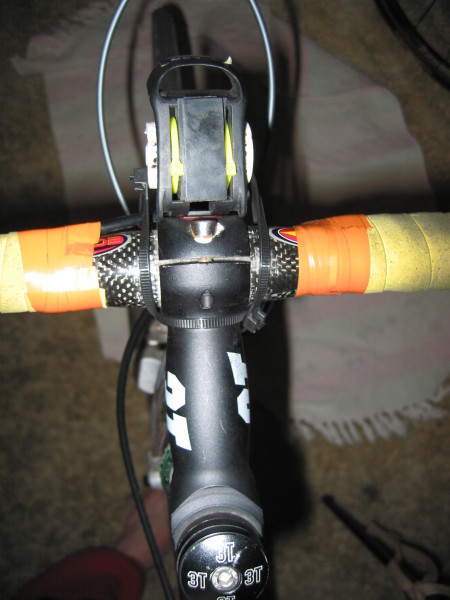 The 301 uses the normal wristwatch style attachment with the pins, so I just bought a cheap drug store plastic band a cut down one side so it could fit through the hole pictured above. You can see that the band has been slimmed: 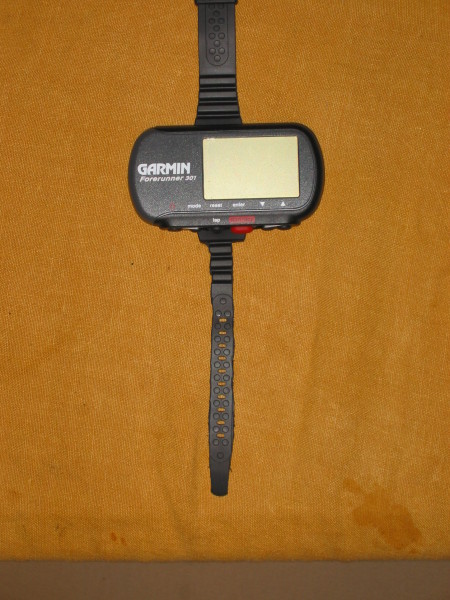 The mount isn't the most steady - the unit does shake. But I think it's pretty sturdy and I'm confident that my gadget won't go flying.