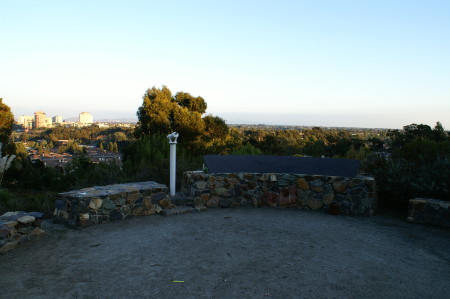 The theater (or is it theatre?) arts part of campus is on the southern tip of campus, which overlooks La Jolla, University Town(e?) Center, and farther into Kearny and Clairemont Mesa. Situated here is La Jolla Vista View (1988) by William Wegman. Follow eitehr link and you'll learn he's best known for his photographs of posed weimaraners.

As far as I know there are no weimaraners etched into La Jolla Vista View, but there might be. The large bronze plaque is situated to match the vista in front of you, with mountains and communites named so you can find them in the distance, much like something you would find in a national park. However, the labelling is unorthodox, and that's where this becomes art. "Barren Wasteland," "A Big Development," and "La Jolla Gateway to Hell" are some of the named sites. There are also buildings & business, which are much less permanent than the mountains and communities also named on the plaque. Much has already changed in the two decades since Wegman designed the plaque.

My opinion of San Diego and urban sprawl closely matches the tenor of La Jolla Vista View. I like the small touches, like a tree with "Meow, Meow" coming out of it. The telescope even works for free! Since this piece of art is hard to find and in a far corner of campus, it is perhaps one of the least visited. I encourage you to check it out, it's well worth it, and you'll learn some real & humorous San Diego geography (which are not mutually exclusive) in the process.