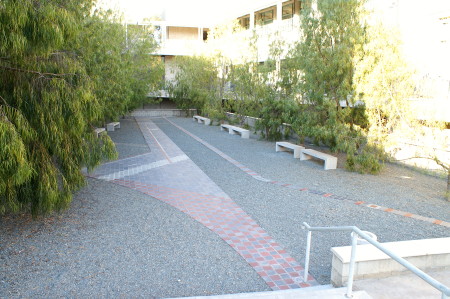 There are only two items from the Stuart Collection located in the UCSD School of Medicine, one of which I've already profiled. The other is Terrace by Jackie Ferrara (1991). At first glance, this might seem to be a courtyard, but I think courtyards have many entrances to it, and this has only one side open. Is it a patio or a terrace, then? When I think of a terrace, it's high above things, perhaps on the top of a tall building in New York City. This is more of a patio - there are buildings surrounding it on all but one side. Perhaps when it was built 15 years ago there were fewer buildings around it; it is no longer a terrace in my opinion. It's hard to take photos of it now because the trees have grown large and wide. I suggest looking at the official site for photos when the trees were much smaller.

I have to admit I don't particularly like this item, or at least its location. It's off in a corner of the medical school that few people ever go. When I visited it I realized that I had walked by it a few times without even noticing it was there. It would have been better if this had been built where more people would notice it and use it. Since it does have benches and shade trees, it's meant to be used, and somehow I get the feeling that it is underused.

I do like the geometries of the bricks, and it looks like it would be a nice place to eat a lunch on a sunny day. Perhaps I should go visit it during some lunchtime and see whether or not it is being used by the medicine folks.