Epic: Surpassing the usual or ordinary, particularly in scope or size; Heroic and impressive in quality.
From Dictonary.com.

It's amazing this drug called cycling. The forecast for this weekend foretold homeric conditions - wind, rain, and even snow or hail. I knew what was in store for me, and I raced anyway. But now, I can brag that I raced up a hill as fast as I could go, in the frickin' snow! Can you say that? That's right, you can't. Well maybe you can, but probably not.

There's not much to say about a ~15 minute effort up a hill except that if I did the climb again, I could do it at least thirty seconds faster. I did scout the climb in the car before the race, but the finish line was moved about 1/2 mile farther up the road, so I had no idea quite where to do a 'finishing effort.' I'm not saying I wasn't hurting, but I could have hurt more, especially more intelligently. At this moment I'm not sure of my finishing order, I think it was sixth or seventh. 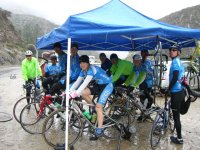 What I'll remember about this race was the fact that the weather was terrible. It rained on us while we were preparing & warming up. We luckily had a pop-up tent that covered us, but not completely. The wind was strong enough for the rain to come in the sides at times. Going up the hill, only a few minutes into my race it started snowing. And I mean for real snowing, something this city-boy from coastal California doesn't often see. The visibility went down to roughly 100 feet. Luckily for my traction the snow wasn't sticking to the ground, but for most the climb there was snow from overnight storms on the trees and hillsides.

Right about when I crossed the finish line, the snow stopped falling and the view was incredible. The climb raised us over 300 meters above the valley floor, so there was quite a view. Even though I was rapidly getting cold, I pedaled up the road a bit farther just to see what there was to see. If it wasn't two hours away across the expanse of L.A. suburbs, I would like to climb this road again, but perhaps when it's a bit warmer. 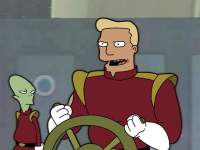 Before the parking lot crit on Sunday, Chris Nekarda and I rode through the Cal Poly Pomona campus to open our legs up a bit and discuss the tatics for the race. We decided that Chris would go for all the primes except the first one, while I would see what I could do if people were feeling frisky.

From the gun a UCSB rider took off and his two teammates were in the front blocking. After a couple laps I bridged up to the UCSB rider and we worked well together, holding off the peloton. As the first prime came, Steve Sperling from UCSC went for the third place prime points and manged to get away from the pack, and bridged up to us. For the next fifteen laps or so, we traded off pulling, but it was clear that the UCSB rider was suffering more than Steve or I. Mainly through a series of hard pulls Steve and I dropped the UCSB rider.

In the closing laps we could see we were close to lapping the field, which is something I've always wanted to do (I'm sure Steve wanted to do it too). With four laps to go I took the sketchy turn a bit too hot and slipped onto my left side. I wasn't hurt badly, and I could have jumped right up and rejoined Steve, but I dropped my chain and that took some precious seconds to fix. By the time I got my chain fixed and was rolling again, I was in third place as the UCSB rider had passed me. However, he was hurting more than me and over the next four laps I caught him and passed him. I didn't even have to attack him to keep him off my wheel as I went by him.

Second place isn't as nice as first place, of course, but I'll take it. It was cool to attack the field and have some genuine race tatics happen behind us, as all of our teammates blocked for us. It wasn't so cool to crash myself out, losing the possibility at first place. It was cool to get back up again, catch and pass the UCSB rider to reclaim the second spot I had earned before my crash.