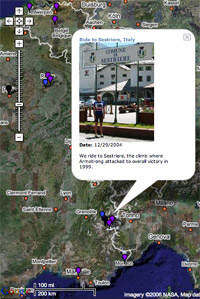 During lunch today I added a module to my photo gallery that allows me to tag photos or albums with latitude and logitude such that they are marked on a map. Using Google Maps along with the Google Maps Module for my photo gallery software, in less than 15 minutes I was able to mark my photos and albums on the earth.

I can tag photos or albums by type, so that when browsing the map, different types can be turned off or on. You can also define places to quickly zoom in on. There is a facility to map routes (like this), but haven't tried that yet. When you click on one of the marker pins, a preview window will pop up, with a thumbnail for that photo or gallery, a link to the item, and the title or description.

It's all very slick, and it worked on my first try. If your browser works with Google Maps, it will work with this. Go check it out!

(p.s. Right now not all browsers show the fonts the correct size, Firefox in particular. I suggest trying a different browser until I fix that problem.)

Are you one of my many* loyal readers? If so, you can add yourself to the list of people who are notified the instant I post something new. Using Subscribe2, it's simple: go to the Email Updates page and enter your email. You will get an email to confirm your subscription, and then you're done!

Limited time offer: Save a click! Just for this post, you can subscribe below. In the future, you'll actually have to go to the Email Updates page. Act now!

* Okay, many is too strong a word. Nonexistant is probably more accurate. 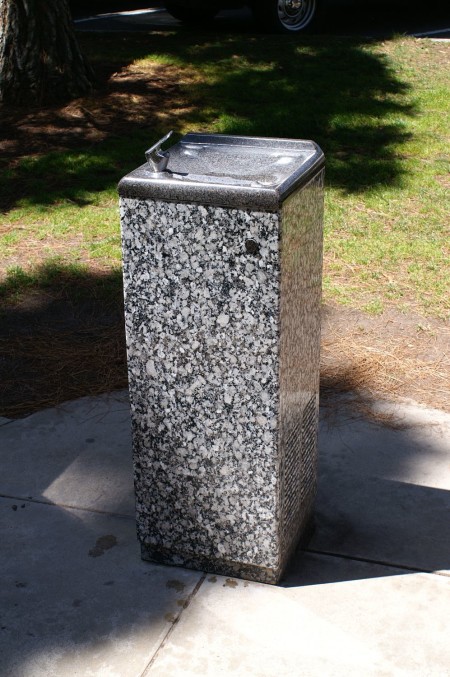 This is the most useful of all the Stuart Collection items. Yes, it's just a drinking fountain. Actually, it's a refrigerated drinking fountain, and it's by Michael Asher, done in 1991. The fountain is made of two kinds of granite, and looks exactly like the fountain you'd find in many buildings. I guess there's supposed to be some kind of symbolism in this, with grass surrounding the fountain, & the history of the site as an Army shooting range. However, it feels kind of stretched in my opinion. The irony here isn't very strong. In the end, it's just a drinking fountain, one that's perhaps more interesting than most. 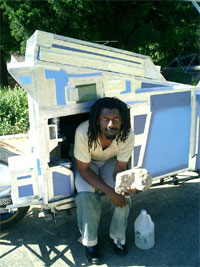 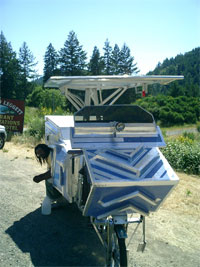 Here are some photos of a "Bike RV" that my father took in Northern California a few days ago. Notice in the middle photograph that there are at least three derailleurs! Here's what my father wrote:

Found parked alongside US101 on the way to Eureka. He lives in it, has pedalled it all around the US, has been doing this for years. The vehicle weighs 600 lbs or so. The panel above the seat is just a sun/rain shade, not a solar panel. The mechanical details were nicely done but I think the aerodynamics could be improved. On the other hand it's geared low and likely never goes very fast. Small bike wheel in front, fat rubber-tired go-kart wheel in back. I didn't look to see what kind of brakes. All in all it's pretty amazing that the guy could live in and pedal the thing around. I talked to him a bit, and as you might guess he seemed mildly unhinged.

My question is how does he get the thing started? Getting 600 pounds moving is no small task. And going uphill? He appears to have at least three levels of down-gearing. How does he go fast enough to not fall over? Maybe he has to spin the pedals at 120 RPM to even go anywhere. I also don't think the sun/rain shade could be that effective. To me, if I wanted to protect myself against the elements, I would get some kind of acryllic shell to go over the rider's position. It would also be much more aero.

Maybe I'm just more sane that this guy, but if I were to do this sort of thing, I'd get a bike trailer to load all my stuff behind a normal bike. Then I could ride a normal unhindered bike if I wished, leaving the trailer at the campsite. I'd have to sleep in a tent, but that's okay.

Just a few days ago, I replaced my four year old white 500 Mhz G3 iBook with a shiny widescreen white 1.83 Ghz Intel Core Duo MacBook (the black one seemed altogether silly to spend extra money on). The laptop is a very nice machine. My home machine is a 20" iMac G5 with a widescreen, and I've gotten used to the extra real estate, so I like the fact that the MacBook has one too. Really, the main reason I bought it is because my iBook had decayed to the point that it was only good for websurfing. I wanted a machine I could use at school, and the iBook just couldn't cut it (I definitely tried to make the iBook work!).

Since Apple is switching to Intel chips, the world of Windows is now available using either Boot Camp or Parallels. I have a copy of Windows 2000, and since I believe that Boot Camp only works with Windows XP, I am not going to try that out. Also, Boot Camp makes your machine dual-boot, which means only one OS at a time and no interaction between the two. Parallels is the more attractive option, it allows you to run Windows along with Mac OS X. The Windows world lives inside of an application that runs on Mac OS X. Choosing to interact with Windows is no more difficult that switching applications. Also, Parallels works with basically any Intel-compatible operating system, so I could use my Win2000 install disk.

After much trial and tribulation (mainly related to the fact that my Win2000 is an upgrade version, not full install) I got Win2000 installed using Parallels on my MacBook. After installing the myriad of security updates, I installed the softwares for my Garmin Forerunner 301. You see, Garmin (right now) only makes software for their gadgets for Windows. They've promised to make a Mac OS X verison of the software I use by Spring 2006 (they have two and a half weeks). Obviously, waiting around for that to be relased will just waste my time, so I was hoping that I could use this whole setup to run the Windows software on my MacBook to talk to my GPS. However, sadly, it doesn't work. It's clear it almost works, since Win2000 notices when I plug in the GPS, but the Garmin stuff can't quite talk to the GPS. The situation seems exactly the same as when I tried using Virtual PC on my G5 over a year ago.

All in all, I like the laptop, I like Parallels, and I'm displeased with Garmin. I'm using a beta 30-day activation key with Parallels, and I'm unsure if I'll buy the full version ($40 for pre-ordering). I really try to stay away from Windows applications. Right now the only app I do want to run is the Garmin stuff, and it doesn't look like that's going to work.