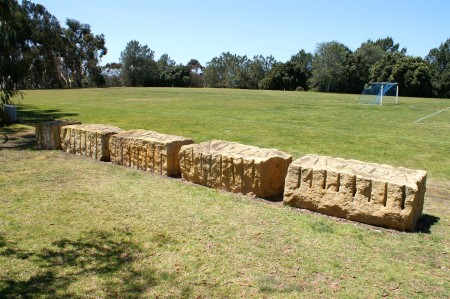 UNDA, by Ian Hamilton Finlay (1987) is in the vein of the La Jolla Project, another Stuart Collection item. This time, the stone blocks are smaller and fewer in number. These stones are English limestone and have the latin word for 'wave' carved into them, unda. To be more precise, the letters are carved out of order with a s-like shape included which transposes the letters to put them back in order to spell unda (see the sixth item on this list of editorial symbols). According to the official page on this item (linked above) the wave moves through the letters like the waves in the nearby ocean, making a literary wave... or something.

It seems to me that since the La Jolla Project had been installed three years before this item, putting plain blocks out on a lawn would have been plagiarism. Finlay probably thought to himself, "I've got all these bloody blocks of limestone, but some other bloke already did art with stone blocks. Let's put some latin on them... and perhaps put it in the wrong order, like the word has been hit by a wave. No! Wait! I've got it!" And the result is what we see today.

This entry in the Stuart Collection is a good one, not a great one nor a poor one. I'm always skeptical of art that I feel is forced (waves upon waves upon undas, bah!) but this is okay despite that. The stone has a nice texture which I'm sure changes by the year due to weathering. The stones were cut roughly so they aren't square and perfect like the La Jolla Project. The stone has character which the unda doesn't ruin. It's worth your time to see.