I've been riding bikes for so long that it's unusual that I learn something new. The last couple weeks I've started learning how to do the madison, easily the most insane event on the track. The madison, named after the arena in New York City, is a team event with two riders per team. One rider is racing, while one rests. In the multi-day race events, often one rider will ride for hours, and then switch off to the other teammate.

In shorter events, both riders are on the velodrome at once. The one who is resting either rides very slowly or holds onto the railing. When the racing team member wishes to be relieved, usually after a lap or two, the resting rider meets the racer, and they exchange momentum via a hand-sling. 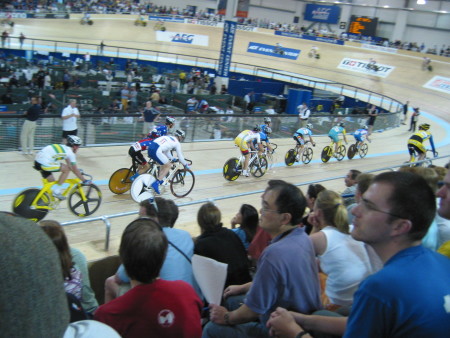 The thing that makes this event so darned exciting is the sheer number of things going on at once. Firstly, of course, there's a race going on. Then, you've got riders coming in & out of the event. Sometimes multiple riders are coming into the race at the same time, so positioning and timing is very important. Since it is a race where you're only going one or two laps, essentially a racer goes nearly all out, followed by a short rest.

For an idea of what it's like to ride in a madison, check out this video from the top tube of a bike from a madison practice.