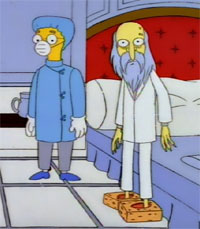 I saw this story about Jacko today. I usually wouldn't even think twice about him, but I'm beginning to see a parallel between Jackson and Howard Hughes, last milennias most famous OCD sufferer. You see, just as Hughes slowly retreated away from reality and society, Jackson seems to be as well. He has gone a whole month without talking to people who want to save him millions of dollars by charging him, well, fewer millions of dollars. It's not like ignoring your own lawyers will convince the plantiffs to drop the lawsuit.

Howard Hughes pulled similar tricks. He frustrated business partners and only showed his face at very rare occasions. But when he did make a public appearance, he did his best to seem as normal as possible, something Jackson can't even manage. Last summer I read this book which was a decent glimpse into Hughes' life.

It will get worse from here on out. Don't forget - he's got two children, so his legacy of insanity will continue when they pursue a career in show business, and you know they will. Paris Hilton is just a warm up act.