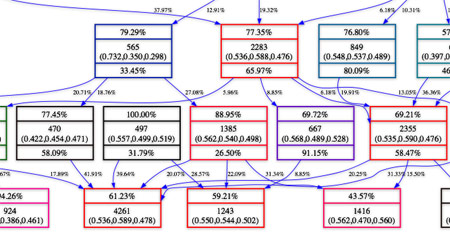 Above is a part of what I've been working on lately. It's a small part of the galaxy family tree that I've derived from a large simulation. In the simulation there are several ingredients that are thrown in the 'box.' Relevant to this are the dark matter particles, which coalesce into consituents of galaxies. The dark matter particles have unique id numbers. Using a some code I didn't write, I process the simulation data and make a list of galaxies along with the particles in each galaxy. Then, using some code I did write, I track particles and galaxies over a number of time steps, which builds a relational mapping. Then, I use Graphviz to make a nice tree, as you see above.

The goal of this is to get an idea of how the galaxies form over the course of the simulation. Of course the simulation tries to mirror reality, so this family tree may be worth something.