A week ago I saw a posting on digg about how Dreamhost sucks. It got me thinking about the problems I've been having with my account with Site5. Let me say that at no point has my experience been anywhere as bad as the one described in that link.

My hosting plan is on a shared webserver. Here is an informative page about my machine, named iaso. It has four Intel 2.8Ghz Xeon processors, and four gigabytes of RAM. It runs Linux which is a solid server OS.

My big problem are periods when this very website is unresponsive. There are lots of other websites on the same computer. And by lots I mean on the order of 600 websites:

The number of users with logins is not a one to one list of websites served, but it's probably a good estimate. All it takes is one of the 600 users with a bad webpage to clog up the machine.

Below is a plot of the load level for iaso over the course of 15 days last month. Without going into specifics, a load level of one means that there is one process needing a processor at any given moment. It will be many different processes, and that's fine. Practically, a machine can stay responsive with up to about a load of three or four per processor. So, on a four processor machine like iaso, a load level of 10-15 is about the highest comfortable level. 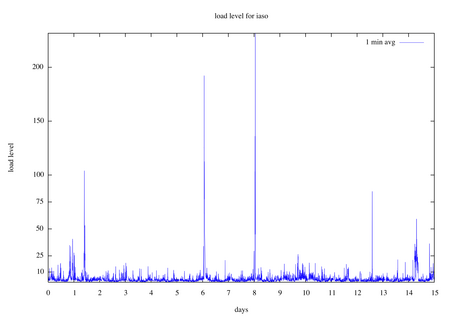 What you see above are many occasions when iaso went well above load levels of 25. The highest peak was a load of 230. In my experience, once the load reaches 25 my website becomes more than slow: it doesn't work anymore.

For comparison, below is a plot of the same thing on one of the nodes of the supercomputer I use, Datastar. This is the node where scientists do heavy-duty analysis on their datasets. For instance, I use this node to process my multi-gigabyte datasets using IDL. People also run Mathematica and other very computationally intensive tasks on this machine. It's got 32 1.7Ghz Power4 processors and 256GB of RAM (what do you have on your workstation, huh?). It runs IBMs AIX 5.3. As you can see below, for the first four days, the load level stays below one process per processor. In the fifth day something happens and it goes above 60 for a while, before the machine gets rebooted and things return to normal. 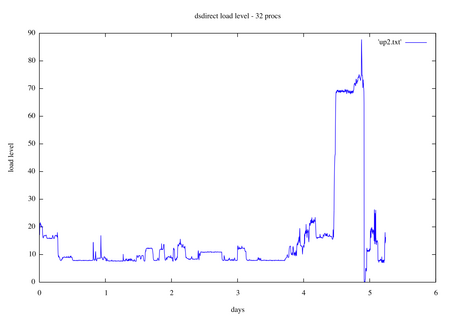 Site5 pays a third party to monitor their webservers, with results listed here. iaso has 99.8% uptime overall and 99.4% over the last month. This is bad enough that apparently I'm due a 5% credit on my next billing cycle. iaso isn't even living up to Site5's own service standards.

Every time I catch my website being slow, I contact Site5 tech support. I know that this is a common problem with shared hosting. I'm sure that Site5 is aware that these outages, and does what they can when they happen. But, when it does happen, it's annoying. It shouldn't happen in the first place. Sometime this summer, Site5 is changing their hosting solution which may help with these problems. We'll see.

One thought on “Site5 Could Be Better”