This last weekend I drove to Las Vegas for a one night stay to celebrate Chris Schroeder's upcoming wedding. Las Vegas wouldn't have been my first choice for such an occasion, but I'm not getting married.

The drive itself is actually much more interesting than, say, the drive on I-5 in the central valley. Unlike that drive, there's lots of topography to see. The Mojave is surrounded by fairly high mountains and to get to Las Vegas you have to drive over them. The weather provided a point of conversation too. The desert southwest was in a heat wave over the weekend and we saw a high of 116 in Baker, CA. I'm sure my mother was happy to not be on this trip.

I went with three other people besides Chris: Paul and Shane, both physicists, and Francisco, a Portuguese bioengineering graduate student. He's Portuguese by nationality, not his studies. We stayed over Saturday night in Las Vegas at Binion's hotel on the old strip. The old strip of Las Vegas was the strip until about the 1950s. Since then, most of the development money has gone to the new strip which is farther South, outside of the Las Vegas city limits. Because the new strip is where most people go, the old strip tries really hard to attract tourist and gambling money.

One of the things the old strip has done to attract visitors is to convert the main street into the Fremont Street Experience. The road was turned into a pedestrian mall and a 5 block long canopy was erected. The inside of the canopy is covered in millions of LEDs which plays video throughout the night. It's all very excessive. The videos celebrate what's great about the USA: NASCAR, dancing ladies, loud classic rock and country music, and cool computer graphics. They also have free street attractions, like four motorcycles in a sphere.

There's other evidence of the USA in its finest form in Las Vegas. I was aghast at the number of people with small children with them at 11:30pm. 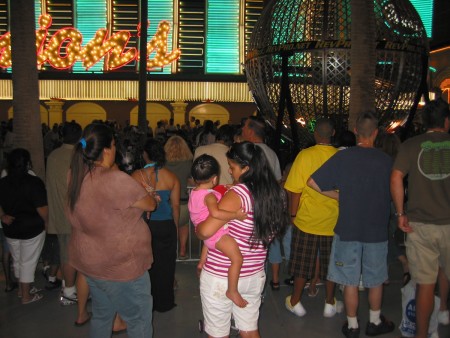 Also the number of amazingly fat people. The convergence of so many temptations is unique too. My submission to temptation of gambling cost me $10. I did not submit to the other temptations which would have further emptied my wallet. 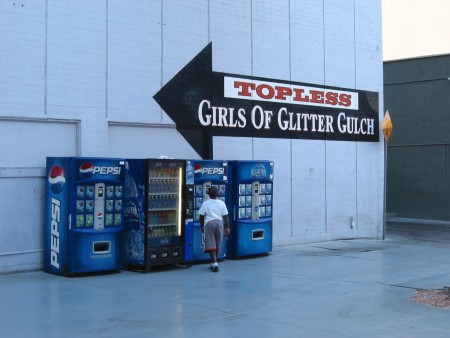 Overall I found Las Vegas more interesting than entertaining. I have a strong enough mathematical background and not enough greed to find gambling worthwhile. I find nudie bars boring. The various shows in Las Vegas are out of my price range (most start at around $70). I suppose if I was a heavy drinker I could find all of the above compelling (or at least a good idea while intoxicated), but, alas, I'm not. It should be a while before I visit Las Vegas again.

Here is a neat time lapse of the drive from my apartment to Melissa's maternal grandmother's house in Newport Beach. I set my camera up on the tripod in the rear section of my Volvo station wagon. I held the tripod down with a few bungee cords, but you'll notice that the camera moves slightly through the duration of the movie. I'll have to devise some sort of better securing mechanism for future efforts. In particular, I'd like to figure out a solid way of having the camera point forward on the dashboard. I cropped the images to remove the majority of the inside of the car as it isn't very exciting.