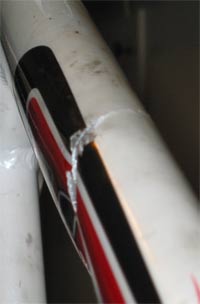 Almost a year ago, during my return trip from Indianapolis, my 2005 Fuji Track Pro was dented due to the TSA improperly re-packing my bike box after inspecting it. I managed to parlay this into an almost $1000 check from the TSA after documenting their liability quite thoroughly.

The bike wasn't actually fatally damaged. It still rode true and there weren't any cracks, just a dent. Aluminum tubes are strong enough to use as long as they aren't creased with sharp edges (this is what I have been told). For the last five months I've been riding my Fuji with a dent in the downtube with no problems - until now. Now, I'm afraid, the bike has made it's last lap of a velodrome. Yesterday I found that the dent has turned into a crack that you can see to the right. The crack starts in the dent and works around the bottom of the tube to the other side.

In my Fuji's lifetime it has seen four velodromes: San Diego, Hellyer in San Jose, Northbrook in Chicago and Major Taylor in Indianapolis. My cyclometer has 2850 km on it, which works out to 1770 mi. Most of my time has been in San Diego, which is a 333 meter track. Major Taylor is also 333m, while Hellyer and and Northbrook are slightly longer. I'll simply use a 333 meter lap. That odometer distance gives 6800 laps. I'm sure the actual number is quite different than that, but you get the idea. 6800 laps is a bunch of going fast, and turning left. And not forgetting to pedal.

Now I need to find a new frame, soon. Hopefully the new one won't have any red on it, my one dislike of the Fuji. When that's all sorted out I'll post a picture of my new single speed steed.