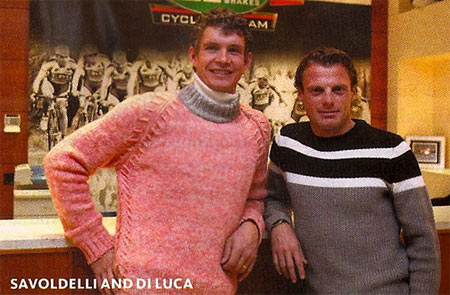 When I was in Europe, I could always pick Italian men out of a crowd. They were the men willing to wear fashion even women aren't brave (stupid?) enough to wear. Before huge wrap around sunglasses became popular for everyone, I saw Italian men wearing them. Somehow I don't think Paolo Savoldelli's hideous pink thing will take the world by storm. Is he wearing two turtle necks below it? Or is the inside gray? Maybe he's wearing it in honor of his two pink jerseys from his Giro wins, but couldn't he have found something a little less ghastly?

One thought on “Crazy Italian Men”