I've seen this Lotus Elise parked on campus often, but recently it got this "007" sticker. Putting the double-oh-seven on your car is about as bad as putting random Japanese characters on your windshield. James Bond did drive a Lotus Esprit in The Spy Who Loved Me, but it went underwater. This Lotus doesn't even have a roof. And yes, this is the same parking lot where I saw the Hawaiian GT-40.

After I took this photo, the driver came up and I chatted briefly with him. I did not say to his face that he's a doofus, but I was thinking it the whole time. Apparently he has the numbers on because he took the car to a race course, but there are 998 other three digit numbers he could have chosen that were less ridiculous than 007. He said his other car he races has "666" on it and he calls it "The Beast."

In the same lot today I saw this Smart Car. While I disagree with the color choice (red? on a 71 HP car?), the owner of this car is ever so much cooler. 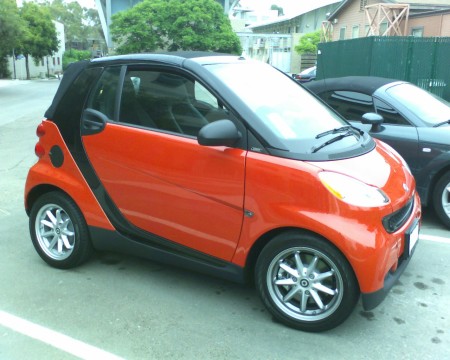