Now this is what I'm talking about (click for full size):

These are my links for August 21st through August 29th:

As a follow-up to the announcement that all judged sports are being eliminated from the Olympics, I'm publishing below an updated medal count. Unlike the medal counts you've seen, this one only counts the 'real' medals; events that aren't ridiculous.

You'll notice that China, which leads the gold rankings by a fair amount in the link above, is by far the most affected by this correct ranking. Indeed, only three of the American golds are improper, while 25 Chinese golds are trash, which is just less than half their total. Eliminating judged sports is not anti-China, it just happens that China focuses on those kinds of events. Many other nations, including the USA, lose a fair number of overall medals due to this modification.

(If you're looking at this with an RSS reader, you'll have to view the full post to see the tally.)

END_OF_DOCUMENT_TOKEN_TO_BE_REPLACED

These are my links for August 17th through August 21st: 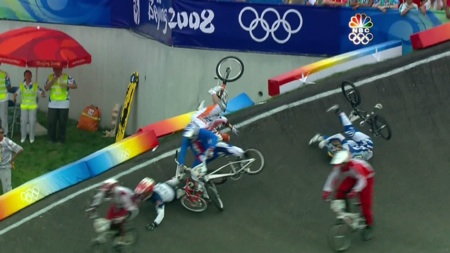 I recorded the BMX races last night out of curiosity. (I've included some HD screen grabs of crashes for your enjoyment; click on them for the full size image.) BMX has been introduced to increase the interest of young people, those who like Xtreme sports. NBC even has a BMX crashes compilation for you to watch while you drink your Mountain Dew or get another tattoo. 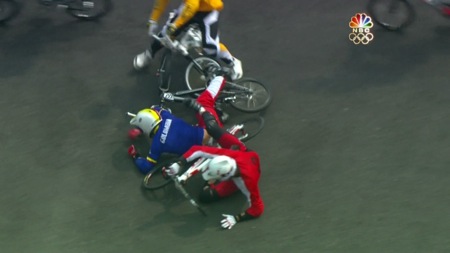 This is the first year BMX is being contested at the Olympics and I'm conflicted about it. While I support any kind of cycling, in order to introduce this kind of cycling, the Olympic Organizing Committee cut two track events (the men's 1000m and women's 500m time trials) to make room for the BMX events. This was done to conserve the number of cycling events. According to this page there are 18 cycling events. Swimming has 34 events. So increasing the number of cycling medals wouldn't have given it a ridiculous number of medals (unless you think swimming has a ridiculous number of events, which I in fact do). Granted, Olympic cycling isn't as popular as Olympic gymnastics, and that only has 14 medals, but at least gymnastics takes place on different equipment. The cycling events range from 40 seconds to over six hours on four different kinds of venues that require very different types of skills and strategies. Each medal rewards a clearly different set of accomplishments. All but two of the swimming events are in the same damn pool (the 10K open-water swim is new this year) with the same equipment, only the strokes and distances change, and the distances vary by far less than cycling. It's not clear that adding BMX is a net gain for cycling in the Olympics, and they could have very easily increased the number of cycling events, in my opinion.

Of course, cycling has the Tour de France every year, while swimming has ?

I think the best thing that can happen is if BMX becomes a kind of gateway drug into cycling. Get the young ones into the sport and then push them into the real hard stuff, like the velodrome and road cycling. Then they'll really be hooked and there's no going back.