My adviser Professor Mike Norman, as part of his job at the San Diego Supercomputer Center, purchased an optiportal system for the new SDSC building which is opening today. An optiportal system is a wall of monitors powered by networked computers such that the screens behave as one monitor. Very high resolution images and movies can be tiled across the screens, as you can see below. Movies and animations can also be tiled across the screens. 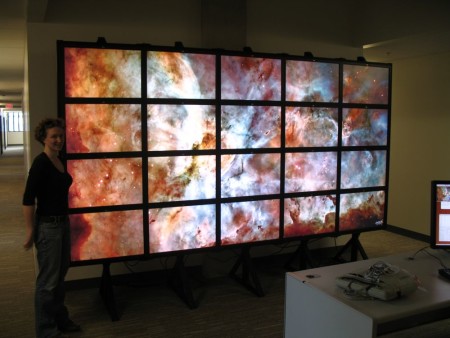 My labmates and I (Rick Wagner in particular) spent the last week feverishly building the system. The primary work was to build the monitor rack. It has many bolts and sliders and adjustments. We arranged to have two holes drilled through the wall for the monitor cables. The 30-inch screens require a very particular kind of cable and getting enough of the right kind that were long enough to reach all the screens was surprisingly difficult.

My main task was to convert some of the publicly available high-resolution astronomical images into tiled TIFFs. Tiled TIFFs break the data up into easy to scale tiles, which is essential for the optiportal. I used many of the images from this page, including the 403 megapixel Carina Nebula image linked there. It was quite frustrating. I tried half a dozen computers and iterations of ImageMagick and VIPS before I finally got a combination that worked.

In some ways, this is worse than a projector. There are gaps between the screens. This requires multiple expensive computers and many, many cables. However, there are some big advantages to this setup. There is no projector that has anywhere the same resolution as this optiportal (2560x1600x20 = 81.92 megapixels). Just one of the monitors is better than all but the most specialized and expensive projectors. The screens are bright and clear, even in normal lighting conditions. Unlike a projector, standing in front of the screen doesn't shadow the image. It has to be seen for yourself; twenty 30-inch monitors are awesome to behold.

Each four-monitor column is powered by a HP xw8600 workstation with one 4-core 2.33GHz Xeon processor, 4GB of RAM, two NVIDIA Quadro FX4600 768MB video cards with dual output, running Ubuntu 8.04 LTS. There is a sixth identical workstation that serves as a head node which sits in front of the screens and controls the output on the wall. There is also a HP ML370 server that has a 1TB RAID5 disk array, and has room for an additional 1TB. Eventually, all the machines will be connected by a 10Gb CX-4 network using a ProCurve 6400cl-6XG switch, and the head node and disk server will be connected to the outside world with a 10Gb optical connection. The monitor array is controlled using CGLX which is developed at Calit2, which is here at UCSD.

Science will not be performed on the optiportal, at least the major calculations won't. Instead, visualizations of simulations run on supercomputers will be displayed and analyzed. The human eye and brain is still a superior judge of the accuracy and meaning of data than a set of conditional equations. It is often necessary to actually see the raw data as clearly as possible. The point of the eventual 10Gb optical connection is that various parallel visualization programs like VisIt and ParaView will be practical. These programs do the data analysis on a remote supercomputer and the visualization is sent to the optiportal in real time for display. In this way, terabytes of raw data don't have to be transferred off the supercomputer, and the computationally intensive part of the visualization takes place on the supercomputer, which has far more processors, RAM and disk space than the optiportal. I hope to someday have some of my data displayed in this fashion.