UC Berkeley has bear statues, UCLA has their bruin statue, UC Irvine even has an anteater. Now UC San Diego has a Triton! 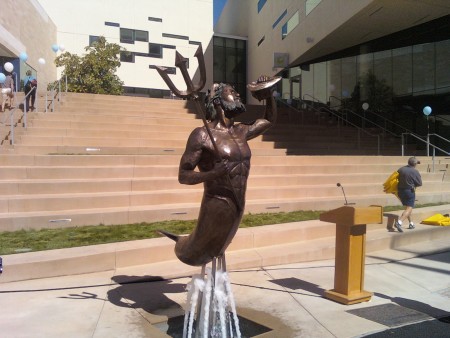 As I walked to lunch I saw the unveiling ceremony ending while the UCSD band (we have a band?) played the UCSD fight song (we have a fight song?). Below the statue there is a few streams of bubbly water and a plaque which explains that the Triton doesn't get to use his awesome trident, he just blows really hard on his conch which scares all the other gods and baddies away.

I, for one, am now waiting for the UC Santa Cruz banana slug statue.

2 thoughts on “Finally, a Triton”