Below is the map showing the just-released 2009 Tour of California stage 8 route. And I'm disappointed. I thought the stage would end on the top of Palomar Mountain, but it is simply going to pass over the top, circle back around and finish in relatively boring Escondito. 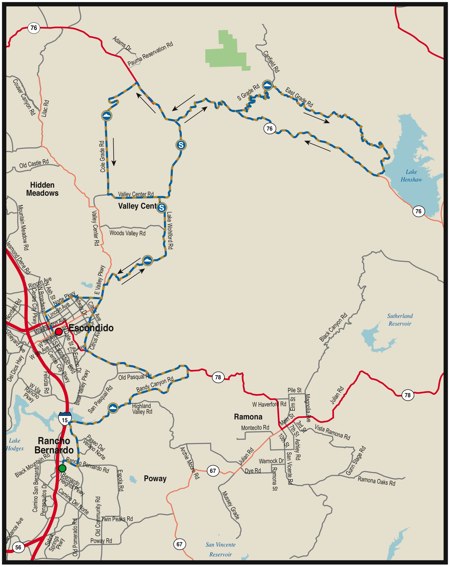 Just like when the race goes through the Bay Area, I am familiar with much of this route. The race starts in Rancho Bernardo, and heads east on Highland Valley Road. That road has several nicely steep sections that kick my non-professional racer butt. I'm sure that the pros won't charge up those hills so early in the race, but their pace would drop me, no doubt.

They go up the hard side of Palomar which is a world-class climb. It is every bit as hard as the Tour de France cols I've climbed. In February the top of Palomar can be quite cold (sometimes it even snows) so the temperature changes along the route could have an effect on the race.

I wish the race organizers would have given us the grand spectacle of a mountain-top finish. I am grateful, however, that they've finally dipped below the Los Angeles divide.

Oh, and I can't forget to note: parts of the race go through Indian reservations, so the racers can get their gamblin' on, if they feel like it.