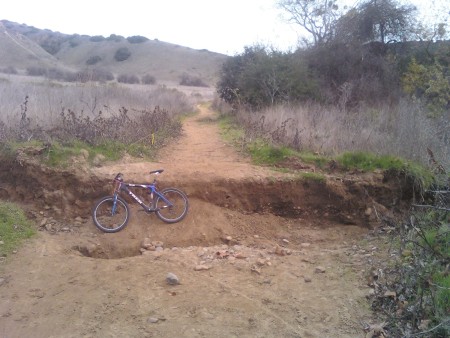 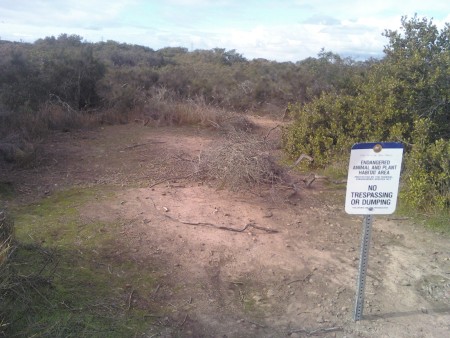 By far my favorite place to ride my mountain bike (that is reachable without driving) are the single track 'tunnels' that are typically reached through Peñasquitos Park (although they aren't actually inside the park, they are on non-park city land). They are called 'the tunnels' because for most of their length they are covered by low bushes and trees just over head height. There are four of them that total a few miles in length and vary in technical difficulty. Until about a month ago, they were somewhat illicit and not patrolled, now they are very expressly illegal. During the rainy season I think it's perfectly reasonable to close them. Muddy and wet ground is especially susceptible to erosion, and nature doesn't need human help to erode the ground during the rainy season. The ditch my bike is pictured in above was fairly level ground the last time I was there, less than a month ago (*).

Unfortunately, there is strong evidence that the City of San Diego is planning on closing them permanently, or at least severely curtailing how many can be used. Since the tunnels are fairly far from any road, it's only cyclists that use them with regularity, but the city feels it needs to consider all the other potential users. Cyclists are the lowest on the public land user totem pole, so you can see how this can do nothing but hurt our interests. I suspect that if they're kept open, they'll have to be upgraded so hikers and equestrians can use them, which will remove much of what is attractive about them (which is the lack of those two groups for a large part). If they're closed for environmental reasons, only cyclists will miss them. It's kind of a lose-lose situation for us.

The City of San Diego isn't full of complete idiots, there is a series of legal drag race events that take place in the Qualcomm parking lot. This alleviates the pressure of what many people want to do and would resort to doing illegally without other options. There is a similar pressure from cyclists who want quality single track trails. If trails are available, legal and fun, cyclists won't have to resort to cutting trails and breaking laws. We'll see if the city has enough foresight to recognize this.

(*) For those my friends to are familiar with Peñasquitos, if you're heading east, this is just past the big deep sandy patch where you used to have to ride on the extreme right, and just before the really rocky climb. I think it's in the center of here. The second photo above is the top of the third tunnel, the farthest north of the three linked tunnels. The riding I did do today (I didn't go into the tunnels) showed that many of the lines we rode in the summer are now completely different.