These are my links for April 27th through May 25th:

Seen this morning in front of the La Jolla Farmers Market, parked in a red zone: 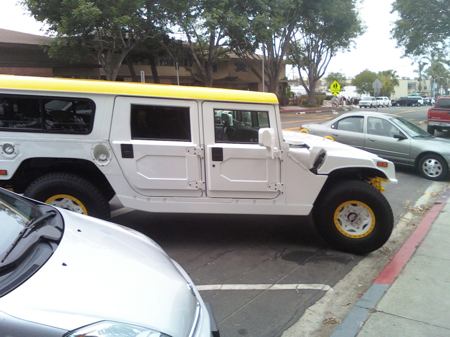 Universal Sports, which is part of NBC, is going to show the entire Giro d'Italia live! I'm guessing that because Lance is riding the Giro, Universal Sports figures Americans will be interested. Down here in San Diego, the local NBC affiliate broadcasts several digital channels over the airwaves. They have their main channel 39-1, that shows full-1080p high definition TV. They also have 39-2, a weather channel, and 39-3 shows Universal Sports. Neither is HDTV, but I'm not complaining. The Tour de France is always on cable, so I have to go to a friends apartment to watch it. I'll be glad to watch this on my very own couch.

My mornings suddenly got much earlier for the next month.

Update May 9: The Giro is being streamed live online, not over the air. It is just a commercial-free stream of the Italian coverage (with inconsistent English commentary) on the Universal Sports website. I guess I read what I wanted to read. I'll take it however I get it.