Last week I traveled to Utah with seven friends (above: Paul, Chris, Stephen L, Mike M, Mark, Mike H, Matt and me) to ride our mountain bikes. The main attraction was the 25 Hours of Frog Hollow race that was held 10 A.M. October 31 to 10 A.M. November 1. The twenty-fifth hour was provided by the end of daylight savings time that happened during the race. 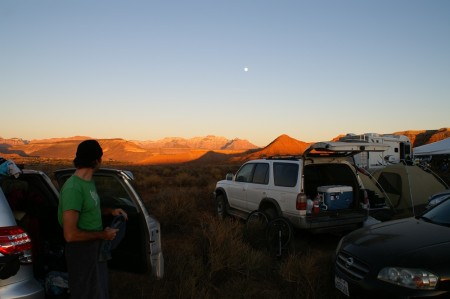 The race was held just outside the sleepy Utah towns of Hurricane and La Verkin, near St. George. The location is amazing, which I'm told is not unusual for Utah. Above you can see Matt watching the sunset on the mountains and the (nearly full) moonrise as he gets ready for a lap. 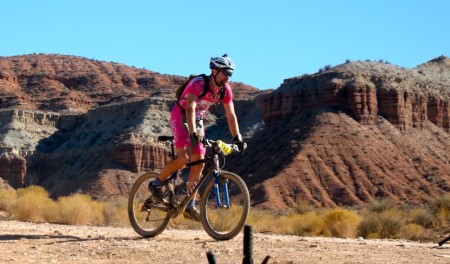 The course itself is broken up into four sections. It starts out with a climb, mostly on fire roads. Next is a descent on the Gem Trail which is fast and smooth and extremely enjoyable. After the Gem trail, there is a section on flat fire road that connects to the Virgin River Rim trail (I think that's the name) which is a very brutal and demoralizing stretch of rocky single track. The trail is littered with sharp-edged flat-topped rocks spaced inches to feet apart. It was difficult to maintain momentum and the terrain made my back hurt. 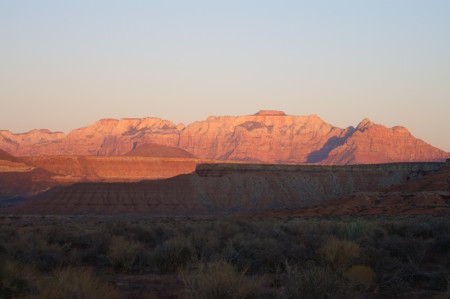 I rode four laps of the course. My first at 11 am, then 3pm, 8pm and finally at 3am. The pace of laps naturally slowed at night, and we also got some sleep in the early part of the morning. The bright moon meant I didn't need my lights for most of the climb on the night laps. This kept my eyes sensitive, and I could see the sky filled with stars. On one of the night laps I stopped for a minute or two to just enjoy the calm and emptiness of the desert at night. The weather was very amenable to racing. It was clear the whole race with minimal winds. The daytime had temperatures in the mid-70s (F, of course), and nighttime in the low 40s. For the very curious, I have the GPS track of my ride online. I didn't clear the GPS between laps so there are some weird smoothing effects on the graphs during the time I turned off the GPS. 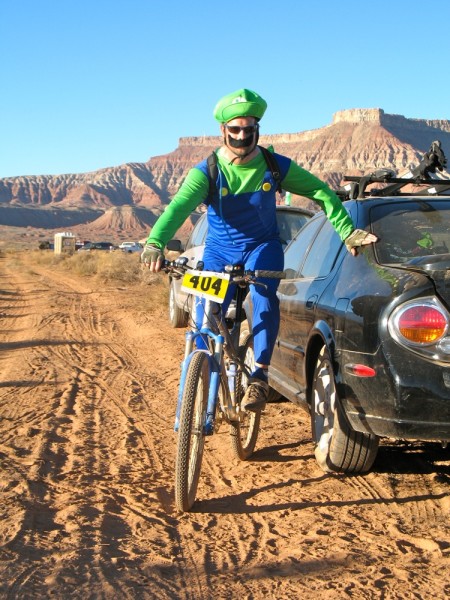 My team was made up of Matt, Chris and Stephen L, and we came in fifth of six finishing teams, out of seven that started the four-person category. The other team in our group, Paul, Mike M, Mark and Mike H, finished one lap up on us and in fourth place. Neither of our teams had any designs on actually competing for a high place in the event, so we are both satisfied with the results. All of us also had Halloween costumes. Mike H above shows his very warm Luigi costume that came in handy for one of his night laps.

I want to also mention the ride we did a few days before the race, on Gooseberry Mesa. This was riding like I have never done before. The mesa has huge rock-face sections that we crossed on which the trail is marked by painted white dots. It felt like sight-reading music for the first time, picking our way on carefully planned routes to cross technical rock sections. The trail network is built on a mesa that narrows to a point high above the surrounding land. The panorama above is a nearly 2π view from the point. The land below is the area on which the race was held, and a few of the fire road sections can be seen. This Google Earth image shows the relationship between the two places we rode. 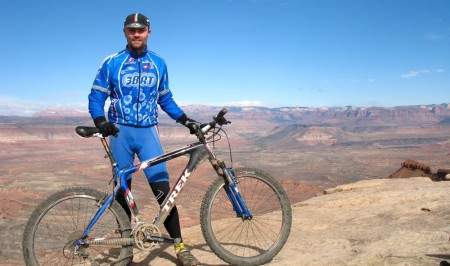 A couple of the trails we rode tracked the rims of the mesa very closely, especially the south rim trail. In this Google Earth image, you can see just how closely the red line tracks the edge of the mesa, and below you can see the sharpness of the mesa edge near the point. It was truly spectacular riding! Again, for the very curious, here is the GPS track for that ride. 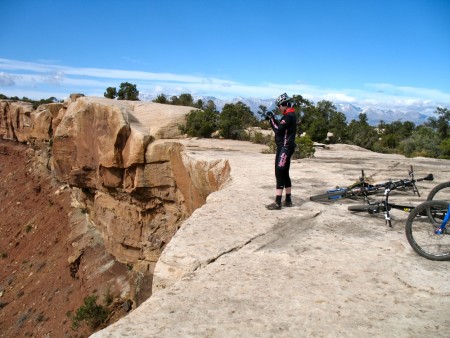