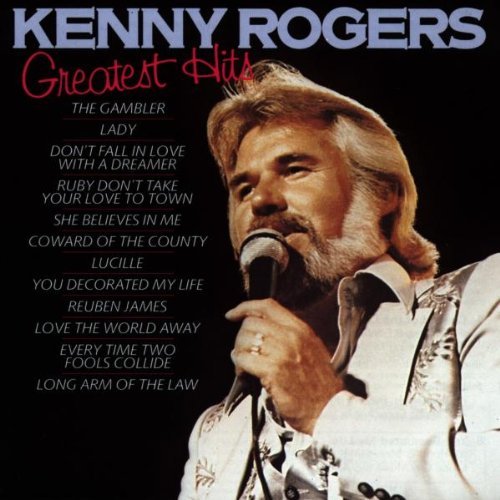 This album hits all the typical country themes: a woman leaving a man ("Lucille"), American military ("Reuben James"), inter-class (or perhaps race) love and intolerance ("Long Arm of the Law"), prostitution ("Ruby Don't Take Your Love to Town"), gang rape and revenge ("Coward of the County"), and love (every other song on the album). What strikes me is how similar these topics are similar to those in rap music, but since it's sung by a white guy with an actual tune behind it, it's somehow more socially acceptable. Perhaps it's because most of the non-love songs here are in the third person, while in rap it's often in the first.

Would I recommend this album? Eh, I'm fairly ambivalent about that. The first sentence above notwithstanding, the album isn't actually as country as I'm making it out to be. I'm generally not a fan of country, so this is actually a small amount of praise. It might be worth a listen just so you can say you've heard Kenny Rogers sing about the topics above. Or you could not, and go on with your day with the knowledge you're not missing much.