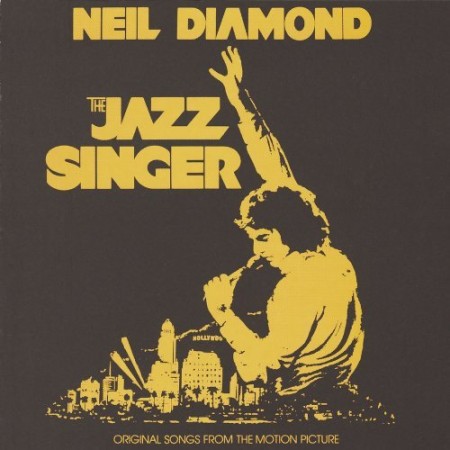 The album The Jazz Singer by Neil Diamond is the soundtrack to the 1980 film remake of the 1927 film adaption of the 1925 broadway musical. The 1980 film has a very low rating as judged by the critics, so I'm not going to bother seeing the movie myself. Diamond's performance was so poor that this movie is Neil Diamond's only acting credit on IMDB.

There is an interesting parallel with this film+soundtrack and the 1992 flim+soundtrack The Bodyguard. The Bodyguard, like The Jazz singer, starred a successful singer (Whitney Houston) making her acting debut. The Bodyguard gets somewhat higher reviews than The Jazz Singer, but they are still far from positive. Like The Jazz Singer, the soundtrack for The Bodyguard did well - so well that it is the best-selling soundtrack ever. It appears that for a class of musicians (notably not rappers, of which many have made a successful transition), acting is not amongst their artistic skills. Neil Diamond and Whitney Houston made best-selling albums for their movies, but apparently they ran out of creative 'juice' and fell flat as actors.

Despite its economic record, I find this album bland enough that it is difficult to form any kind of opinion about it. Which is probably not a good thing, unless you're in the mood for music that blends easily into the background. So, my recommendation is to skip listening to this album. Here's a look twelve years into the future: you can skip The Bodyguard soundtrack, too.