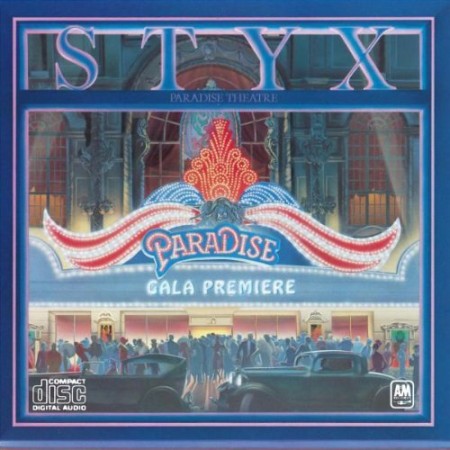 The album Paradise Theater by the band Styx does not include their song "Mr. Roboto". For most of you, that is your signal to stop caring about this review and move on with your day. The brave, the steadfast, and the bored may continue on!

This album is not terribly dissimilar from last week's album, which is somewhat disappointing. I was not thrilled with REO Speedwagon, and this album isn't any different for me, if I'm honest. The most I can say about this album is about one song, which is the only one that made an impression on my brain. The song "She Cares" has the line: "she treats me like a human", which is such a vacuous (*) statement that it needs to be commented on. How else might "she" treat the singer of the song? Like a dog? A teacup? A 1953 Studebaker Commander Starliner? I can understand the need to rhyme in a rock song, but that line is insulting to either "she" or the singer, and definitely to the listener's intelligence.

My recommendation for this album is identical to last week's album: skip it, and if you must, just listen to bad radio and Styx will come on eventually. "Mr. Roboto" is kind of fun, so if they play that, consider yourself lucky. Note that the content of the top-10 albums list does not change for three weeks, which is how long it will be until my next review.

(*) I wanted to pick a good synonym for "stupid" to describe the line in the song, so I went to the Mac OS X system Dictionary application which includes a thesaurus. The entry on "stupid" synonyms has a bonus section apparently unique to this word titled "Choose The Right Word" that advises which synonym is appropriate for each situation, and how to avoid insulting someone unnecessarily. I think the next iteration of IBM's Watson should include the ability to scan an email for misuse of "stupid" synonyms. Think of all the marriages and friendships that might be preserved!