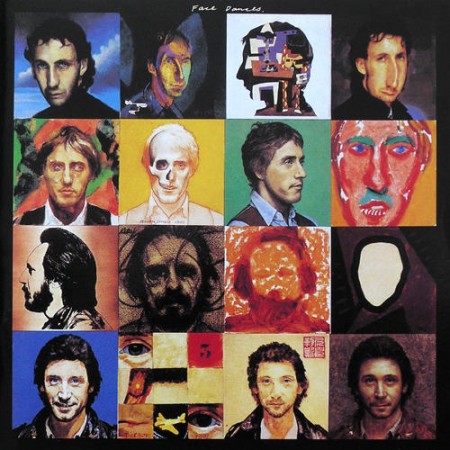 Face Dances was the first album put out by The Who after the death of Keith Moon. I'm not familiar enough with The Who to know if that had an effect on this album. I'm guessing it probably did. The best I can say about this album is that the songs are all very "poppy" and the lyrics and melodies stick in your head very easily. But overall, it's a fairly unremarkable album and probably got on the top-10 due only to the strength of their previous albums. The fact that the band disbanded two years after this album came out is a good sign that they were already on the decline as a creative unit.

According to the Wikipedia page, the cover artwork was commissioned from various famous artists. Judging from the top and bottom rows, it looks like the artists were handed the same photos. The bottom row is the most disappointing - three of the frames are basically identical, and I'm guessing they filled in the fourth with random icons to break the monotony.

Edit: Anyone want to proffer a guess what the middle-row, left-column icon is?

My recommendation is that this album is not worth checking out.