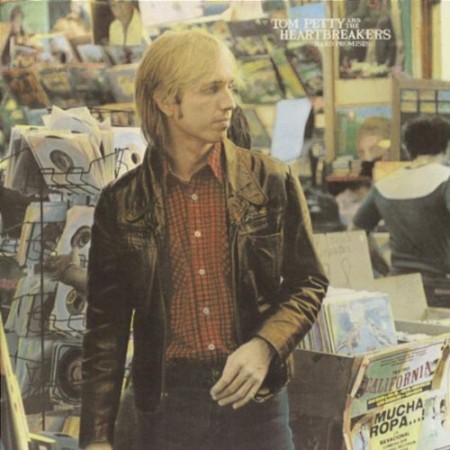 I just love the anachronism that is the cover of this album. I'm not talking about the plaid shirt Tom Petty is wearing (which is in fact cool again thanks to hipsters), or his leather jacket. No, I'm looking at the racks of records in the background, and especially the display stand of 45 single records. No doubt the goal of the photo was to put Tom in a cool and hip situation, and I say "mission accomplished!". Styles are cyclical, and LP records are presently cool (this time only partly thanks to hipsters, but also to luddites who like the sound of analog music), but 45 singles are much more rare now. My theory is that the kind of person who will get up out of their seat to change or flip a LP, instead of clicking a mouse a couple times, is not someone who would buy just a song or two from an artist. They buy the whole album and listen to it while drinking their microbrews and eating non-pasteurized cheeses. Single-song purchasers are the ones who now go to iTunes and download the latest hot single from the latest generic pop music sensation.

On to the actual content of the album Hard Promises by Tom Petty and the Heartbreakers (TPatHs). I've been a fan of TPatHs for a while, so I had already heard many of the songs on this album. There are a few weaker songs (like "Insider") but overall the songs are entertaining. It's typical TPatHs. I have, in fact, actually seen TPatHs live, in Atlanta, of all places. I can say that Mike Campbell is an excellent guitarist and that Tom Petty was definitely high during the concert.

One of the stated goals of this project is to see how popular music has changed over my lifetime. TPatHs are kind of a counter-example to this. TPatHs are still making music that doesn't sound all that different from what they were doing 35 years ago. This is not a bad thing, per se, because good music is good music. I will say that if TPatHs have changed, they have gotten less rock 'n' roll and a bit more bluesy, but it's not a big change.

In summary, if you like any TPatHs, you should check out this album.