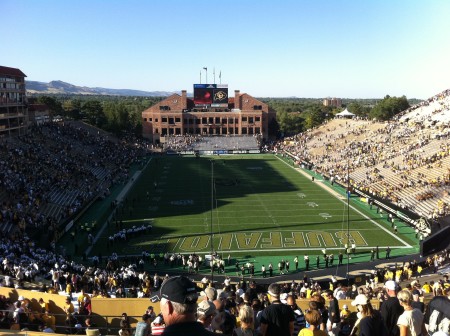 A few days ago, on Saturday September 10, I attended the collegiate American football match between the University of California Golden Bears and the University of Colorado Buffaloes. Although we've lived in Boulder for over a year, and I work in the football stadium, this was the first Buffs game I have attended.

The game was an exciting one. The Bears led for most of the game, but the Buffs tied the game in the last minute of regulation, sending the game into overtime. Quite surprisingly, the Bears managed to win in overtime, something that as a True Blue, I am not used to seeing from my Bears.

This is the first season where the Buffs are a member of the Pac-12. I think they are not quite up to the standards of the Pac-12. Here are some of my observations from the game.