Here's what I see when I look at my Google Reader stats:

That count will go no higher.

Google has decided to retire Reader on July 1st. Reluctantly, I have decided that I will not be using Reader on my six year anniversary. As a test, for the last week I have been exclusively using tt-rss installed on this web server as a replacement. So far it has been working pretty well. It's not a perfect replacement for Reader, but Reader isn't a perfect replacement for what Reader used to be, either. And unlike Reader, since it's self-hosted, no one will be taking it away from me.

If you want an account on my server, and you are someone I know personally, don't heistate to ask!

On our recent driving trip to Yellowstone and Montana, I had lots of time to think about random things while behind the wheel. One of them was to wonder of the major US Interstates, which two come the closest without actually intersecting? My guess was that it's some place on the East Coast, but due to my general lack of knowledge of East Coast highways, I had no idea which two it is.

Being a huge dork, I decided to figure it out.

END_OF_DOCUMENT_TOKEN_TO_BE_REPLACED

I have heard from a couple people that Yahoo! Mail will not send messages to my new email address. Below is a screen capture demonstrating this (not that I doubted them):

My email address is indeed valid, and I have now sent and received hundreds of emails using it. Furthermore, the specifications for email addresses are very simple, and my email address follows them (obviously). Yahoo! clearly needs to hire someone who can read a Wikipedia page and write a simple regular expression validating email addresses. Actually, a quick Google search (natch) proves that this has already been done dozens of times.

Just yet another reason why I'm glad I finally switched away from Yahoo! Mail. Good riddance.

Looking at the oldest email I can find, I have been using my Yahoo email address for nearly 9 years. Back then, there was no Gmail as an option. The only other webmail that was comparable was Hotmail. And there was no way I was going to use Hotmail because it was, and still is, owned by Microsoft. For much of that time I have even paid a yearly fee to Yahoo to remove advertisements and add other features.

In the last year I have become increasingly unhappy about Yahoo mail. They have refused to enable IMAP for anything but smart phones. GMail has enabled IMAP for everything for a long time. Yahoo's servers are slow and flaky. Sometimes I cannot access my mail for half an hour (or more) until someone (presumably) does something somewhere to clear it up. I could overlook all of these things, mainly because I knew that switching email providers would be a chore.

However, the last straw was when they added a new feature that allows you to chat with your facebook friends in Yahoo mail. I suppose that this might be useful to some people, but it smacks of "me too" by Yahoo. The faceplace is the new hotness, something Yahoo hasn't been in a decade, and since Yahoo can't innovate their way back into relevance, they've just given up. This is the kind of stuff that insults my sensibilities.

Initially unrelated to all of this, my brother recently purchased a new domain: skory.us. He purchased it primarily so he could make a 10 digit email address: ?@skory.us (? = some letter of the alphabet). I thought that was pretty cool, and I wanted in on that action.

What pushed me to make a decision is that in a couple weeks my Yahoo mail membership comes due, and I didn't want to give them any more money.

Therefore, last weekend I decided to sign up for a free Google Apps account using the skory.us domain. I swapped the MX DNS records over to Google's servers, and started pulling all my old email from my Yahoo account. The pull of 50,000+ emails took over a week and wasn't straightforward. I had to baby sit it daily on each end. THIS is why I was so hesitant to switch email providers because I knew it would be a hassle, and it was a hassle.

The move wasn't perfect - although I pulled all my sent mail (i.e. email I wrote), I can't get it into the Google sent mail folder. And there's still more work to do. I have my Yahoo address in many, many places on the internet that I am going to have to slowly change. In the meantime, the Yahoo email will forward to Google.

(First Letter Of My First Name)@skory.us

I don't often post twice in one day, but I had to show this: 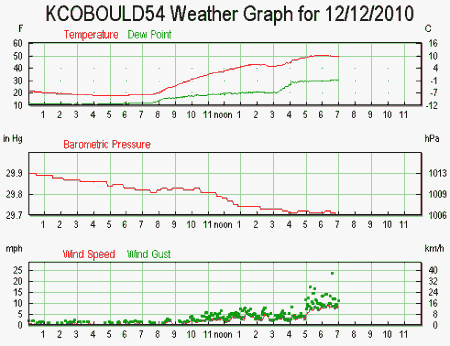 Sunset was at 4:36pm (and the sun fell behind the mountains even before that), but as you can see above, it actually got warmer as the sun set. The wind also picked up at the same time, and the air pressure fell, indicating that the heat was due to the wind warming up as it blew down the mountains. Boulder weather is weird!