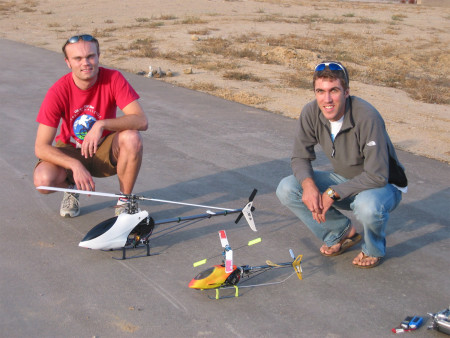 Above shows me with my new helicopter (the white one) and Tyler Ofstad with his. I finally got it all put together today. Unfortunately, I was unable to get it in the air today as there were some bugs I needed to fix. They were the type I probably would have caught if I was more experienced. But that's to be expected with this new model.

Playing exclusively on the computer doesn't give me complete confidence that I can actually apply these skillz to the real world. There's no reset button in the real world. A confidence-builder is how much better I can fly the Blade CX2 now (which my father bought for Christmas last year). The last time I flew the CX2, nose-in (when the controls are backwards) flying was a bit sketchy - now I can fly in all orientations. To that end, check out the video below (16.85mb, 1m 11s) of some heli gymnastics. 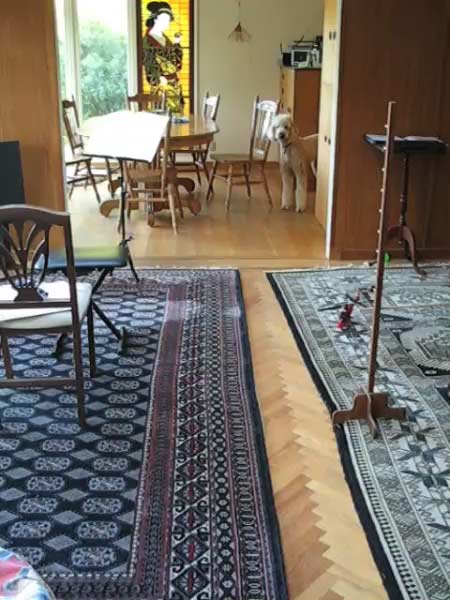 The width of the skylight is about twice the diameter of the blades, so there's not too much wiggle room.

I left my helicopter alone for over a month recently because I had become frustrated. It seemed that all of a sudden, my ability to fly had eroded. I could no longer keep the heli stable. Other times, the heli would be twitchy and erratic and unflyable, while even just sitting on the ground with no input from the control sticks.

After the internet provided no clues about the twitching, I took it to a local shop. The shop tech guessed I had a bad crystal in the receiver. As soon as he popped in a new set (in the transmitter too, of course) the heli was as good as new.

Since then I've bought a new Lithium-Polymer battery that allows nearly 20 minutes of flying time, compared to the 5-7 from the included Nickel-Metal Hydride battery. I also bought a different motor which the helicopter manufacturer recommends for maximum flight time. The old battery still works, but it is not as satisfying as the new one.

Below is a video of me taking the heli up to about eye level, (well out of ground effect) hovering for a few seconds, and bringing it back down safely. I think the heli looks far more stable that it did in my last post on this topic. 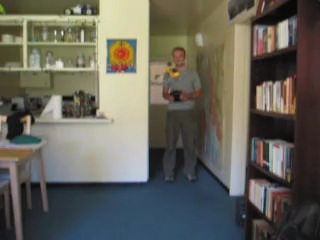 Since I made the above movie a few weeks ago, my helicopter is again on the fritz. This time, it's the tail motor which no longer works. The tail blades very easily strike the ground, and this causes the tail rotor to slow down (obviously). In order to speed the tail rotor back up, a quick burst of current is required, which repeated enough times eventually burns out the motor. The symptom is a nearly uncontrollable heli. I have burnt out two tail motors.

Since I don't want to continually buy new tail motors ($10 a pop), I went ahead and bought myself the RC simulator I yearned for only two weeks ago. As you can see in the movie below, crashes in the virtual world are much less devastating: 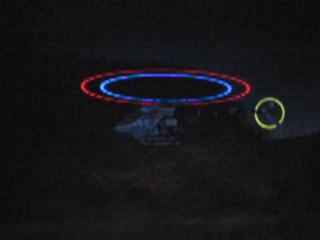 In this movie I'm flying using the night mode, which puts lights at the tips of the rotors so you can see the orientation of the heli. Red and blue on the main rotors; yellow on the tail rotor. Please excuse the poor quality of the video as I made it with my (relatively) antiquated digicam. I would have used a software video capture program, but they're (very) not free and cause the computer to slow down so much that the aircraft is uncontrollable. Below is a video showing a bit more flying skill and no crashes: 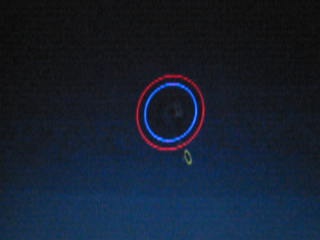 My goal with the simulator is to improve my instincts and reflexes, so when I return to the real world, I'll have mastered all the basic skills. It's also fun to fly and not have to worry about real world consequences.

Lately I have been enjoying flying my Blade CP helicopter. I've purchased a new battery/motor combination that has extended my flight times to about 15 minutes. I've also become proficient enough that I can (usually) run the battery down before I break anything crucial. However, there's still limits to my flying. The battery takes roughly two hours to charge. I try to keep myself from overstepping my skill level. Of course I have to try new things in order to learn, but I've found that if I get too aggressive, I make costly mistakes.

It is time for me to greatly increase my practice time through the magic of personal computers. Behold the Realflight G3.5 RC Flight Simulator. This simulator comes with a USB controller with the same look and feel as a RC transmitter. The program has a large library of fixed wing aircraft and helicopters that can be flown in a variety of locations, indoors and out. It has a good physics engine and 'real' obstacles. This means that if you try to fly through the scenery, you'll crash into it. The plane will even break apart in a realistic amount. For a small crash it might lose a tail. For a big crash, it will break apart into many parts. Click here for a large collection of screen shots and movies.

The best thing about the simulator is the big red button on the USB controller that instantly resets everything after a crash. That's much cheaper than the real world!

As is usually the case, this is a Windows-only program. Luckily for you, you don't have to buy me a PC so I can play this, as Melissa has a Dell. It isn't the fastest thing, but it is capable of running the application.

How much will this cost you? For the low, low wish list price of $200. Compared with some the other things I lust after, this is downright reasonable! 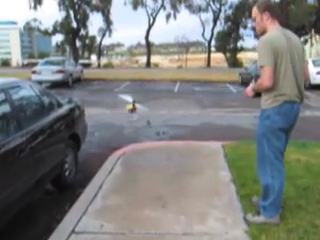 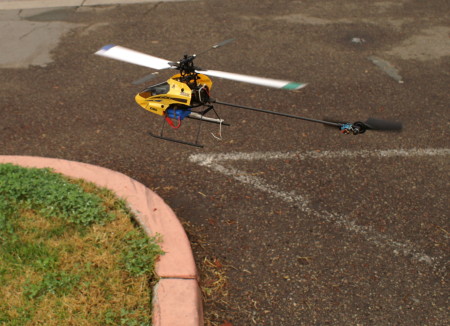 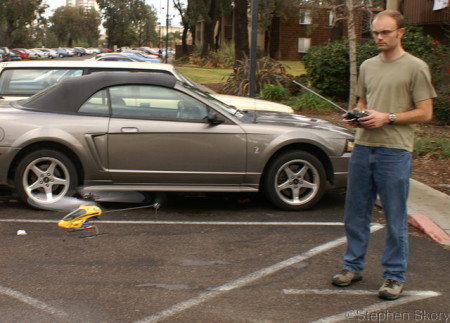