My birthday wish list was a bit excessive, I know, so here's a much more reasonable xmas list. Some of these items will need to be mail ordered if you want to get exactly what I link to.

There ya go. That ought to get you started. 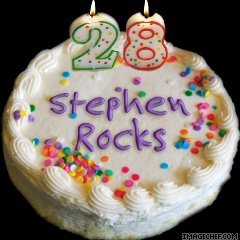 In just over one month I will turn 28. An anniversary of this magnitude deserves appropriate celebration and grandeur. You can make your contribution to this in quite a few ways:

If you think everything on that list is too expensive, here's one more thing I'll accept:

This is my 28th birthday, people, either you're gonna spend some money on me or put in some ridiculous effort.

Lately I have been enjoying flying my Blade CP helicopter. I've purchased a new battery/motor combination that has extended my flight times to about 15 minutes. I've also become proficient enough that I can (usually) run the battery down before I break anything crucial. However, there's still limits to my flying. The battery takes roughly two hours to charge. I try to keep myself from overstepping my skill level. Of course I have to try new things in order to learn, but I've found that if I get too aggressive, I make costly mistakes.

It is time for me to greatly increase my practice time through the magic of personal computers. Behold the Realflight G3.5 RC Flight Simulator. This simulator comes with a USB controller with the same look and feel as a RC transmitter. The program has a large library of fixed wing aircraft and helicopters that can be flown in a variety of locations, indoors and out. It has a good physics engine and 'real' obstacles. This means that if you try to fly through the scenery, you'll crash into it. The plane will even break apart in a realistic amount. For a small crash it might lose a tail. For a big crash, it will break apart into many parts. Click here for a large collection of screen shots and movies.

The best thing about the simulator is the big red button on the USB controller that instantly resets everything after a crash. That's much cheaper than the real world!

As is usually the case, this is a Windows-only program. Luckily for you, you don't have to buy me a PC so I can play this, as Melissa has a Dell. It isn't the fastest thing, but it is capable of running the application.

How much will this cost you? For the low, low wish list price of $200. Compared with some the other things I lust after, this is downright reasonable!

I've recently discovered an obscure kind of photography, Shift/Tilt Photography. By using a lens that can shift laterally as well as tilt the lens elements, some very interesting effects can be achieved.

Shifting the lens laterally has the effect of keeping the edges of a vanishing object stay parallel. Buildings or door frames often suffer from this, here is an example of this vanishing effect. This happens because the film is not parallel to the plane the parallel vanishing lines define. Conveniently, wikipedia has some nice graphics showing that the goal in shifting the lens is to keep the image plane parallel to the object while also keeping the image on the film.

Another attractive ability of a shift/tilt lens is shown below. By tilting the lens, the sides of the shot can be brought out of focus in creative ways. There is a stripe of the photo which is in focus, and on each side the image is out of focus. Obviously, by rotating and shifting the lens, the location of the stripe can be moved on the image. 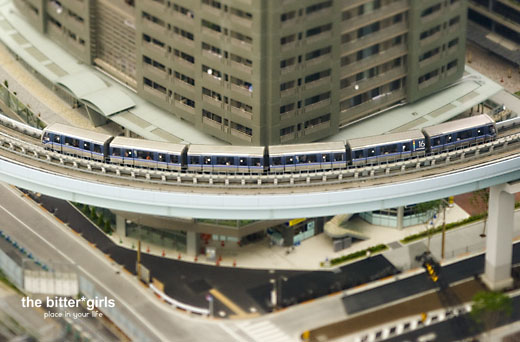 At first glance, this image above looks like it's of a scale model. It is in fact not a model, rather it's an aerial photograph (or from a tall building) using a shift/tilt lens. Here are more examples of this kind of photography from the same site. I'm fairly certain that these "the bitter* girls (place in your life)" (#) photos have been photoshopped to enhance the colors because they look just too saturated to be real. This has the effect of making things look more like a scale model with clean, unweathered paint. I think there's also been some down-sampling because even where the photo is in focus, there's not very much detail.

Through extensive searching online, it seems the widest variety of shift/tilt lenses are Russian-made. Here are a couple lenses which claim Minolta compatibility: MC 35 mm ($600) and MC 80 mm ($400) tilt/shift lenses. If any of you are feeling particularly generous, go ahead and buy me either lens. If you're feeling especially generous, buy me both!

It's time for you to step up and buy me something that will start my film-making career. A Radio-Controlled Helicopter with a gyroscopically stabilized video camera. 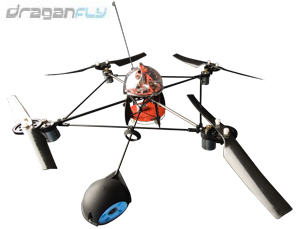 If you go to the website for the heli they have several videos you can watch made with this $2,400 toy. They seem to suggest it is good for businesses like golf courses and utility pole inspectors to buy. Forget that. I want to go have some fun with this. I'll plan some sort of obstacle course between trees and power lines. Yeah, that's a good way to not cut out the power to my neighbors and lose my helicopter. Remind me to rub off the serial number before I go have some fun.